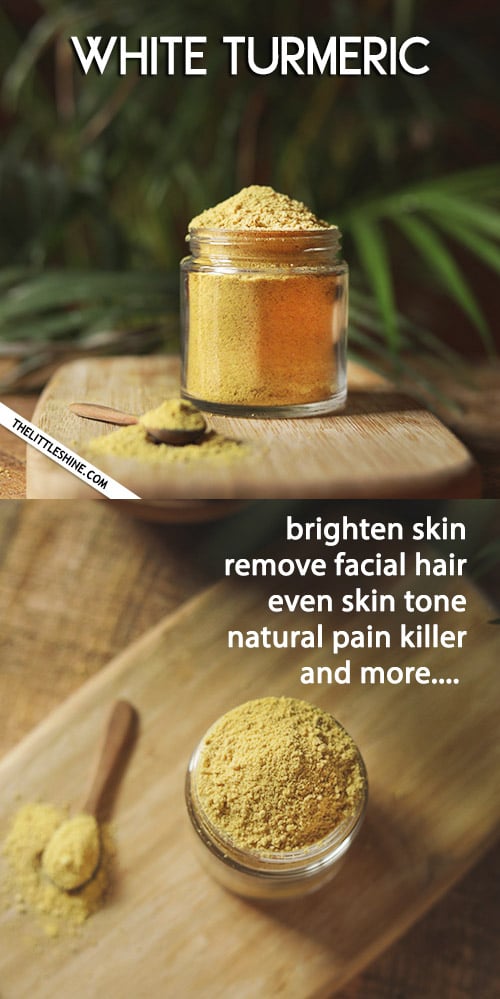 Turmeric or yellow turmeric (haldi, as the Indians call it) is a common spice found in the kitchen of every household. Turmeric is not just like any other ingredient. It is commonly used and has a range of uses from culinary additions to health benefits. However, did you know there are different types of turmeric, such as, cooking turmeric, wild turmeric mainly used for skin care and also white turmeric that is also known as called Poolankilangu, Kachur and Zedoary that has wonderful medicinal uses and beauty benefits.

what is “White Turmeric”?

Heard of it before? Never knew it even existed? Thought it was the same thing as yellow turmeric? Well, here’s an answer to all your questions. White turmeric also known as zedoary or amba haldi, is an ancient spice and one among the rarest herbs to be found, as it is less commonly grown as compared to yellow turmeric. White turmeric also has a lot of compounds like starch, curcumin, sugar, saponin, resins and flavonoids. It is often confused with ginger and has an aroma of mango (hence also being called amba haldi).

How is Yellow Turmeric different from White Turmeric?

White turmeric is not as commonly used and found, as compared to yellow turmeric. White turmeric is a rhizome (stem of a plant situated at the surface of the soil or underground and has shoots) which has a lighter flesh and a bitter flavour as compared to yellow turmeric which has tough brown skin with orange flesh (due to the high content of curcumin in the roots) and a light but pungent taste.

Relief from pain and inflammation:

White turmeric has anti-inflammatory properties which can help treat wounds. It also has a compound called curcumin, which helps to reduce pain and provides an analgesic effect. It can be used to treat open wounds. Those who suffer from arthritis can use white turmeric, as it helps treat inflammation.

Many people suffer from digestive problems and heartburn and white turmeric can be the solution for you. It regularizes bowel movements, indigestion, and in turn aiding flatulence. It helps people suffering from constipation, diarrhea or even loss of appetite.

It helps reduce skin allergies as it also has anti-bacterial and anti-fungal properties which work effectively in reducing the microbes and inhibit fungal activity in the body  the compound curcumin acts as an anti-allergen and prevents allergic reactions. It helps to brighten and even skin tone. Take a tbsp. of gram flour in a bowl. Add in a tsp of white turmeric powder to it. Finally add in enough water to it and mix well. Use it to wash your face and your body. READ MORE – TURMERIC SKIN BRIGHTENING BATH POWDER

Gram flour has mild exfoliating properties and turmeric is a natural remedy to remove facial hair. Combine 1 tbsp. of rice flour with 1 tsp of white turmeric. Mix it well into a paste with buttermilk. Apply this mixture on your face and body. Once the mask dries, using wet fingers gently rub to exfoliate and remove the mask.

It has anti-toxic properties:

A general solution to various problems like healing of wounds, fighting infections or even a beauty hack, white turmeric has got it all! It has a lot of antioxidants and can act as an antidote.

Helpful for the respiratory system:

A lot of people have a buildup of phlegm and mucus blocking their nasal passage and leading to respiratory trouble, coughs, colds, asthma and sinus. White turmeric can help clean up the lungs and give one ease in breathing.

White turmeric can act as a detoxifier and help detoxify the body (as it has diuretic properties), improve one’s cognitive functioning, decreases the risk of cancer, cures ulcers, helps the skin, acts as a blood purifier, gives menstrual pain relief for women and improves one’s overall health.

Turmeric tea Recipe – To make white turmeric tea, all you have to do is boil dried 1/4 tsp of dried white turmeric in a cup of water, strain and drink. This tea is very very aromatic. READ MORE – MORNING DETOX TEA RECIPES – burn fat and get clear skin

Well, little did we know that white turmeric can be this beneficial to us. Try it if you wish to and gain from its benefits!

THINGS TO ADD TO YOUR SHAMPOO FOR HEALTHY HAIR GROWTH

NATURAL SKIN BRIGHTENING MASK for your face and body

DARKEN HAIR AND STOP HAIR FALL with these 2 magical ingredients