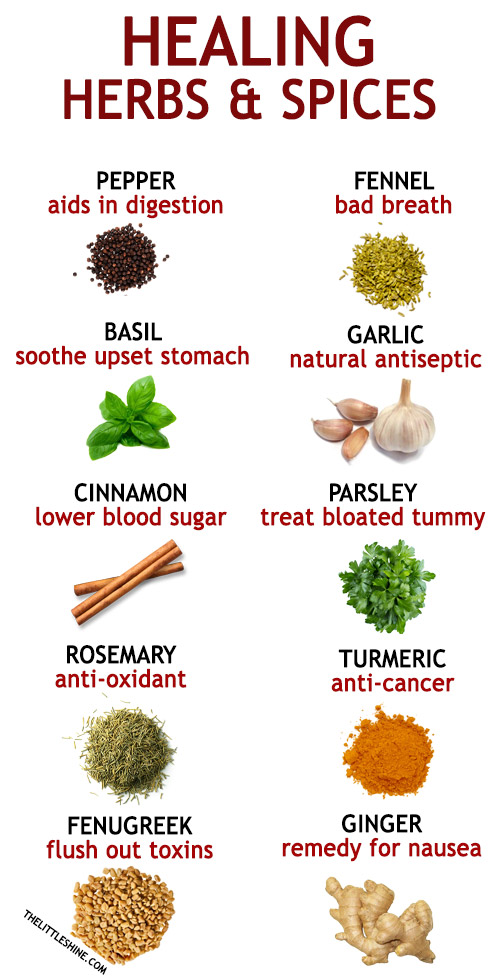 Herbs and spices bring food to life. With a bit of experimentation, you can reach a bliss point of taste and aroma that will take ordinary dishes to a whole new level. The use of herbs and spices has been incredibly important throughout history. Many were celebrated for their medicinal properties, well before culinary use. Dozens of herbs and spices contain useful plant compounds, but the following 10 are healing standouts!

PARSLEY – Parsley may seem rather common to be found on our list, however this is one seriously under-rated herb. Parsley is so incredibly healthy that using it as nothing more than a pretty garnish then tossing it in the trash bin afterward is almost criminal! Parsley is one of the riches sources of vitamin K which is great for improving skin health and promotes faster healing of skin ailments. Parsley is also an excellent source of vitamin C and iron which strengthens the immune and circulatory systems. Parsley is powerfully antioxidant, helps to detoxify all of the body’s systems, and improves digestion, treats bloated stomach and nutrient absorption.

GARLIC – When eaten daily, garlic can help lower heart disease risk by as much as 76 percent: it moderately reduces cholesterol levels (between 5 and 10 percent in some studies), thins the blood, and thereby staves off dangerous clots, and acts as an antioxidant. Garlic’s sulfur compounds also appear to ward off cancer, especially stomach and colorectal cancer. The compounds flush out carcinogens before they can damage cell DNA, and they force cancer cells that do develop to self-destruct. Strongly antiseptic, antibacterial, and antifungal, garlic can help with yeast infections, some sinus infections, and the common cold.

GINGER – Ginger is a popular spice used in several forms of alternative medicine. Studies have consistently shown that 1 gram or more of ginger can successfully treat nausea. This includes nausea caused by morning sickness, chemotherapy, and seasickness. Ginger also appears to have strong anti-inflammatory properties and can help with pain management. Ginger may also relieve heartburn and bloating.

ROSEMARY – This woody herb is rich in antioxidants and is a great reviver when it comes to sharpening memory and increasing concentration. Since it fuels more oxygen to the brain, it acts as a wonderful replacement for those addicted to caffeine.

CINNAMON – It is known to produce insulin which results in more balanced blood sugar. It has a similar effect on blood lipid levels, aiding the liver in balancing and improving overall cholesterol levels. Cinnamon is commonly known as full of vitamins and nutrients, most notably vitamins A and K. Cilantro is also high in antioxidants and minerals such as potassium, iron, and magnesium.

FENUGREEK – Fenugreek seeds have the ability to absorb excess stomach acid and rich in fibre which helps for better digestion and also flush out toxins. Consume in either cooked or liquid form. Soak few organic fenugreek seeds in a glass of water for about 2-3 hours or overnight. Drink that water on an empty stomach in the morning by straining out the seeds.

BLACK PEPPER – It contains compounds that studies suggest may inhibit the growth of cancer cells. Pepper also packs enough heat to break up congestion, the reason it was traditionally used in chest plasters. Pepper is also said to stimulate appetite by increasing the flow of saliva and digestive juices.

TURMERIC – Turmeric, the spice that gives curry powder its yellow hue, is used in Indian medicine to stimulate the appetite and as a digestive aid. But lately it’s getting attention as a potentially powerful cancer fighter. Studies have also linked turmeric to reduced inflammation in a number of conditions, including psoriasis. Curcumin is a remarkably powerful antioxidant, helping to fight oxidative damage, boosting the body’s own antioxidant enzymes, and is an anti-cancer spice. This is important because oxidative damage is believed to be one of the key mechanisms behind aging and many diseases.

FENNEL – Fight bad breath and get healthy teeth ad gums by chewing fennel seeds or parsley. Boil 1-2 tsp of fennel seeds in 1-2 cups of water. Use this solution as your mouthwash, twice daily. You can also do oil pulling using coconut oil.

BASIL – Use the fresh or dried leaves basil as a medicinal food to soothe digestion, stomach cramps, and constipation and to ease headaches and depression. Make basil tea to soothe an upset stomach. Boil a few basil leaves in some water and drink it.

AMLA FOR EXTREME HAIR GROWTH – BENEFITS AND WAYS TO USE

Long, thick and healthy hair is every girls dream but not all are blessed with...
Read more

The teeth whitening kits you find in the market have a lot of chemical ingredients...
Read more

Herbs and spices bring food to life. With a bit of experimentation, you can reach...
Read more
©